We all of some reason, would fall prey to our own egos, which in-turn leads to our own destruction. 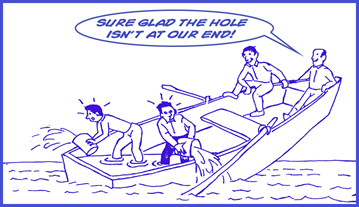 Normally, we used to escape from work. We pinpoint on others, rather doing our work in time and gets into trouble.

Our day to day team activities is the base for our success. We have to provide clear instructions to our team members to do the task in time. Without such action, we rely on others hoping that they would do. At last, none will do, instead gets into trouble at end.

That’s not my job, is what we are mentoring our-self and backbitting the others instead for not doing the job, that can be done by our-self.

That’s not my job

This is a story about four people: Everybody, Somebody, Anybody and Nobody.

There was an important job to be done and Everybody was sure that Somebody would do it. Anybody could have done it, but Nobody did it.

Somebody got angry about that, because it was Everybody’s job. Everybody thought Anybody could do it but Nobody realized that Everybody wouldn’t do it.

It ended up that Everybody blamed Somebody when Nobody did what Anybody could have done.

We are all working towards the same common goal. Success comes from the value that each member brings to the table. Sometimes this means going above and beyond. Put values out of the box.

Success lies on doing what you can do best, not on what others do.